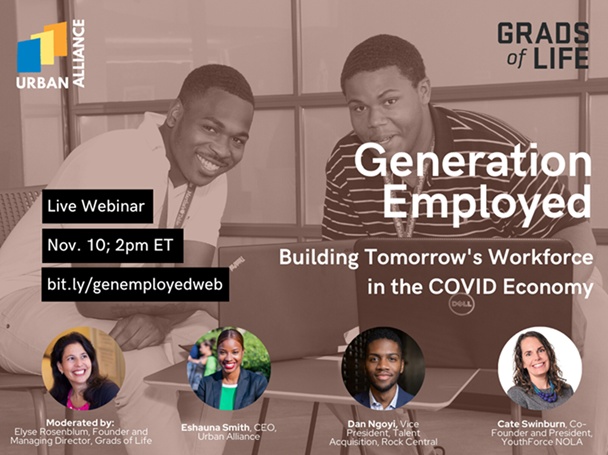 Join Urban Alliance and Grads of Life for a webinar examining the current state of youth in this economy, the far-reaching benefits of strong youth employment - and how to ensure that an entire generation is not left behind during the pandemic.

Youth have been the hardest-hit by COVID-related unemployment in the US, yet while relief efforts have focused on small businesses, families, and keeping the economy churning, little attention has been paid to the needs of the roughly 42 million Americans ages 18-24 who contribute about a quarter of household income nationwide. The surge in youth unemployment has ripple effects not only for the next-generation workforce, but for families, communities, businesses, and the economy as a whole.

Along with our partners from the Rock Family of Companies and YouthForce NOLA, we'll discuss how businesses can act now to ensure today's students have the tools needed to become tomorrow's workforce.

Or
If you have linked your account to one of the following social networks, please click on the relevant icon to log in
Not a member yet?
JOIN HERE!